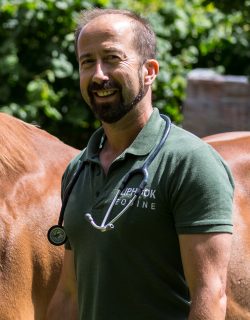 Huw graduated from the University of Liverpool in 2000. After some time at Auburn University in Alabama, USA he worked in Tipperary where he was based at the Kedrah Stud where he was primarily involved with sports horse breeding. During this time he also spent time at Colarado State University, USA learning embryo transfer techniques. He then moved back to UK and worked in ambulatory equine practice in Surrey for 2.5 years before joining Liphook Equine Hospital in 2004. During his time as an ambulatory vet at Liphook Equine Hospital, Huw has continued to develop his interest in stud medicine, and looks after some of our larger studs, as part of our dedicated reproductive team. In 2016, he gained a certificate in Equine Stud Medicine, and is currently the Junior Vice President of BEVA (British Equine Veterinary Association).